INDULGE ABOVE THE CITY

One World Observatory features a restaurant and bar with sprawling views of the New York City skyline. Join us for a specialty cocktail or sit down for a full-service meal. Now featuring dining packages!

Elevate your dinner plans at ONE Dine.

Enjoy first-class service and gourmet cuisine featuring a diverse and seasonally inspired menu and signature dishes. Our bar features curated cocktails, a full offering of wines and hand-crafted beers to suit every preference.

Make a Reservation for A LA Carte Dining

Restaurant and Bar Hours of Operations 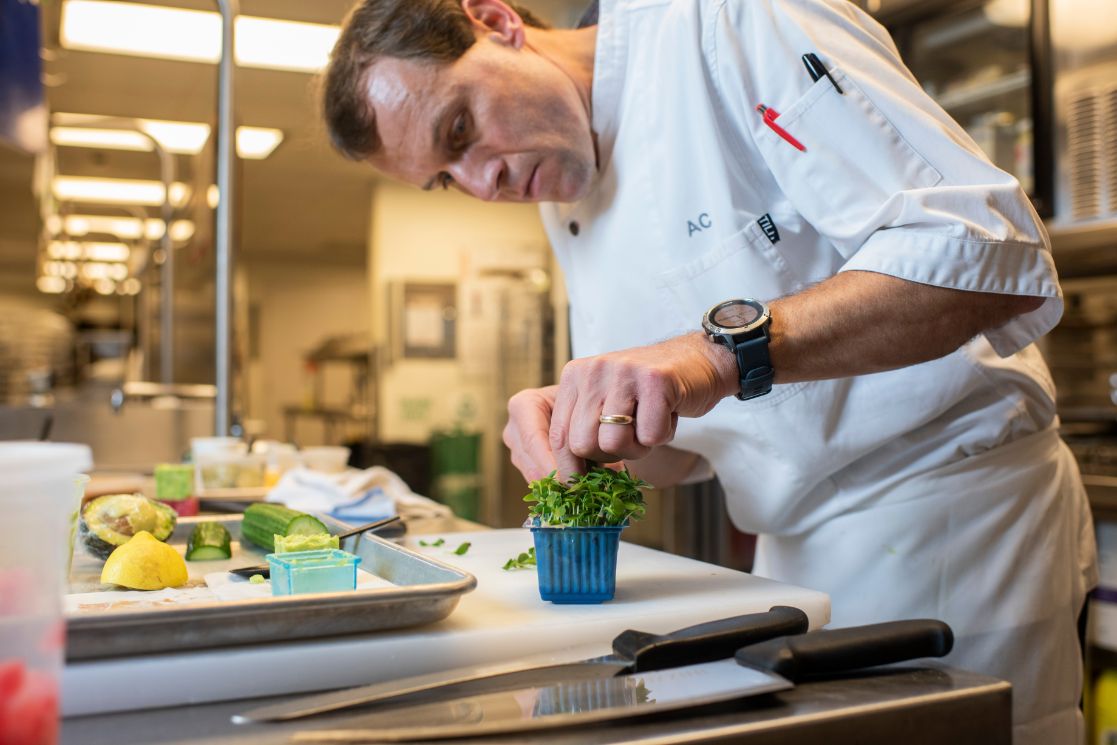 Educated at the Provincial Vocational School for Hotel and Catering Trade in Tyrol, Austria, Michael Schmutzer serves as Executive Chef at One World Observatory. In this role, Schmutzer brings over 30 years of international culinary and hospitality experience to create innovative cuisine for guests from all over the world.

An accomplished chef, Schmutzer has served four-and-five Star and Diamond restaurants & hotels such as Doral Arrowwood, Abigail Kirsch Catering, and Seabourn Cruise Lines. Not only is Schmutzer a culinary master, but as a 2006 Culinary Federation Competition Gold Medalist, he dedicates much of his free time to advancing his skills in the kitchen arts.

When he is not pursuing his passion for food at Legends at One World Observatory, Schmutzer serves as the Chairman of the Board at the American Culinary Federation – Westchester & Lower Connecticut Chapter. In this role, Schmutzer stays current with restaurant trends and innovations, as well as gives back to the local culinary community.

A dedicated philanthropist, Schmutzer is heavily involved in charitable endeavors and volunteerism, supporting such causes as The United Way, The Arc of Westchester, and Feeding Westchester, for which he raised funds and awareness in 2014 by running the Boston Marathon.

Schmutzer’s experience, expertise, and dedication to furthering the culinary arts make him a valued leader of the team at One World Observatory, where much of his focus is on expanding his staff’s skills and experience.

Banquet Chef, Reuel Vincent, launched his culinary career working as a prep cook at Creative Catering Agency. With no formal culinary education, Vincent used his time at the Agency to learn the restaurant business through hard work and dedication to his craft.

Following his time as a prep cook, Vincent served as a stage at the Gilt, Two Star Michelin-Restaurant at The New York Palace, where he assisted with the preparation of food and maintenance of the food preparation areas. After honing his skills at the Gilt, Vincent returned to the Creative Catering Agency, where the Agency promoted him to lead cook. After learning all the responsibilities for this role, he wanted to advance his culinary skills. He spent more time learning how to source the right ingredients and how to create culinary delights. It was not long before the Agency rewarded Vincent for his dedication and advancing his skills with a promotion to Head Chef.

Today, Vincent services as Banquet Chef at Legends’ ASPIRE at One World Observatory. In this role, he oversees creating bi-annual menus for the restaurant, as well as researching and procuring seasonal ingredients for his menus. He is also in charge of the execution of each event at both ASPIRE and the One World Observatory, working with guests to create custom menus that work with dietary and event-specific needs. He is also responsible for staffing events, hand-selecting each employee to ensure events run seamlessly.

“I’m not passionate – I’m hungry” says Vincent, “and with that, being a part of a team where I can make a meaningful contribution.”